The Times' inaccurate portrait of Ann Coulter being outflanked by the Tea Party was accompanied in Sunday's edition by a hostile profile of fiery anti-Islamic provocateur blogger Pamela Geller by Anne Barnard and Alan Feuer. It appeared on the front of the Sunday Metro section under a selection of photos of Geller and the headline "Outraged and Outrageous." 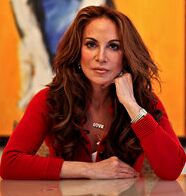 Pamela Geller's apartment, in the fashion of the blogosphere, doubles as her office. It is a modern full-floor unit in a high-rise on the East Side of Manhattan that could belong to a socialite or the editor of a lifestyle magazine. There is ample light and a tasteful lack of clutter. The kitchen appliances are made of brushed steel; the countertops are slate. In the earth-toned living room hangs a painting, in vibrant colors, of a woman in a swimsuit.

It is in this genteel setting that Ms. Geller, 52 and a single mother of four, wakes each morning shortly after 7, switches on her laptop and wages a form of holy war through Atlas Shrugs, a Web site that attacks Islam with a rhetoric venomous enough that PayPal at one point branded it a hate site. Working here - often in fuzzy slippers - she has called for the removal of the Dome of the Rock from atop the Temple Mount in Jerusalem; posted doctored pictures of Elena Kagan, the Supreme Court justice, in a Nazi helmet; suggested the State Department was run by "Islamic supremacists"; and referred to health care reform as an act of national rape.

Ms. Geller has been writing since 2005, but this summer she skyrocketed to national prominence as the firebrand in chief opposing Park51, the planned Muslim community center she denounces as "the ground zero mega-mosque."

The reporters gave Geller backhanded credit for having "helped draw thousands to protests against Park51 on June 6 and Sept. 11," and stirring protests against Debbie Almontaser, founder of a Muslim public school in Brooklyn, who was later forced from her job.

The outrageous and the solemn are deeply intertwined in her character. Ms. Geller admits to using Atlas Shrugs to test topics significant (the conflict in Sudan) and outlandish (that a young Barack Obama slept with "a crack whore"). She has taken up arms against "honor killings" as well as against a Disneyland employee who fought to wear a head scarf. She inspires laughs at sites like Loonwatch, but critics say her influence is serious: a spreading fear of Islam and a dehumanization of Muslims comparable to the sometimes-violent anti-Semitism and anti-Catholicism of earlier eras. Even some of her former right-wing allies say she has gone too far.

"I think she's enabling a real bigotry - a lot of people are convinced by the propaganda she repeats like a mantra," said Charles Johnson, who runs the blog Little Green Footballs, where Ms. Geller got her start as a frequent commenter. "Nine-eleven didn't happen in a vacuum - it came from a long history. But when people like Pam Geller are the loudest voices out there talking about it, it drowns out everything else and makes everyone look crazy."

Times Watch isn't sure the point of the above, given that blogger Charles Johnson has washed his hands of the right and has no allies or credibility among conservatives.

Two days later, Ms. Geller invited readers to protest the "9/11 monster mosque being built on hallowed ground zero," in a post that was among the first to spread the misimpressions that the project was at the World Trade Center site and would solely house a prayer space. The next week, The New York Post took up the cause ("Mosque Madness at Ground Zero"). Fox News booked Ms. Geller on Mike Huckabee's television program. Sean Hannity hosted her on the radio.

Ms. Geller, though, had some suggestions. She and other bloggers quoted selectively from the imam, Feisal Abdul Rauf, stressing his description of United States policy as partly responsible for 9/11. They branded him a "radical Islamist." They declared that his talks against extremism and violence were "taqiyya" - the hiding of true beliefs, religiously sanctioned for Muslims, usually minority Shiites, under hostile rule. And Ms. Geller said, without evidence, that the center's financing might be tied to terrorists.

Isn't all quoting by definition "selective"? The Times can hardly hold that against Geller, given the Times has undertaken its own selectivity, barely covering Rauf's controversial remarks that U.S. policy was to blame for the 9-11 attacks. That glowing coverage includes reports from Anne Barnard herself, who defended the imam in a front-page story for the Sunday August 22 edition of the Times, in which she seemingly took it as her mission to rebut charges of extremism against Rauf.

The Times also held Geller responsible for what it considers America's new "antipathy for Islam."

Opposition to Park51 grew - and with it, antipathy for Islam. A New York Times poll last month found that two-thirds of city residents thought the project should be relocated. A Quinnipiac University poll of likely New York State voters showed that 90 percent of Republicans - compared to 34 percent of Democrats - thought that a mosque near ground zero was wrong. And the portion of Americans with a favorable view of Islam reached its lowest ebb since 9/11 - 37 percent, according to an ABC News/Washington Post poll.

Later, the Times unwittingly revealed how Geller, a blogger that concerns the Times, got famous in the first place: By committing a piece of actual journalism the Times and other media outlets wouldn't:

Readership grew steadily, and spiked whenever she took on hot-button issues. In early 2006, when Muslims rioted over cartoons of the Prophet Muhammad printed in a Danish newspaper, Atlas - unlike much of the news media - posted the cartoons, and hits leaped from scores to tens of thousands.

During the Lebanon-Israel war later that year, Ms. Geller video-blogged from an Israeli beach, flicking water at the camera, arching her bikini-bared back provocatively and equating Palestinians with Hamas.

Geller disputed several factual points, including that one, in a typically take-no-prisoners response at her blog: "Just to show how avid and careful they were in their quest for the facts, they have me video blogging from an Israeli beach. Won't Fort Lauderdale be surprised to find out that the Zionist war machine is now occupying Florida beaches?