But a Times media reporter wrongly suggested the "Birther" theories only erupted after Obama became president, among conservatives, when in fact they first circulated during the Democratic primaries, stirred up by supporters of Obama rival Hillary Clinton.

President Obama released his long-form birth certificate on Wednesday, a step that injected him directly into the simmering "birther" controversy in the hope of finally ending it, or even turning it to his advantage.

The gamble produced dramatic television as Mr. Obama strode into the White House briefing room to address, head on, a subject that had been deemed irrelevant by everyone in his orbit for years even as it stoked conservative efforts to undermine his legitimacy as president. 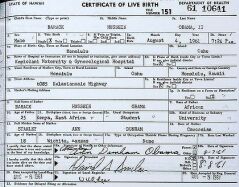 Mr. Obama's comments risked elevating the discredited questions about where he was born, but also allowed him to cast his political opponents as focused on the trivial at a time when the nation is facing more important issues.

Would those "more important issues" include fund-raising on Wall Street and taping an appearance on "Oprah Winfrey," as he also did on Wednesday? Neither has Obama been a profile of leadership with his vague and partisan budget "plan," a political response to Republican Rep. Paul Ryan's more substantive proposal.

False accusations about Mr. Obama's being born abroad - and the implication that his election was thus invalid - have percolated on the Internet and among conspiracy theorists since the early days of his presidential campaign, when aides distributed a shorter version of the birth certificate that is normally given out by officials in Hawaii.

It's ironic that the liberal media's obsessive reporting of "Birther" rumor-mongering may have lent credibility to the idea Obama was born overseas. On Wednesday, Times media reporter Brian Stelter brushed against the issue without conceding any ideological component, noting a report that found that "of the three main cable news channels, MSNBC hosts spent substantially more time talking about the citizenship issue than those on CNN or Fox News."

But Stelter himself failed to get his "birther" time-line straight, falsely implying the theories erupted after Obama became president and were spread by "right-wing radio and television hosts," when in fact they first circulated during the Democratic primaries, stirred up in April 2008 by supporters of Hillary Clinton.

The facts about Barack Obama's birth never wavered. But the more the fraudulent theories were debated and dispelled in major news media outlets, the more people seemed to believe them.

The conspiracy theories were promulgated on the Internet and by fringe publishers in the early days of the Obama presidency, and they were encouraged by right-wing radio and television hosts and, more recently, by Donald J. Trump, who is toying with a Republican run for president.

But murmurs on Internet forums led to whispers on talk radio. Some hosts shrugged it off, but others, like Rush Limbaugh and Lou Dobbs, questioned why the long-form birth certificate had not been released.

Stelter's conspiracy time-line, highlighted above, appears out of whack with his own reporting. In a July 25, 2009 story Stelter claimed: "The conspiracy theorists who have claimed for more than a year that President Obama is not a United States citizen have found receptive ears among some mainstream media figures in recent weeks."

Stelter's "for more than a year" time-frame would date the rumors before July 2008, before Obama's election, and during the fiercely contested Democratic primary. Indeed, the rumor that Obama was not a U.S. citizen was initially spread in April 2008 by a group of Hillary Clinton supporters, as reported April 22 by Politico's Ben Smith and Byron Tau:

If you haven't been trolling the fever swamps of online conspiracy sites or opening those emails from Uncle Larry, you may well wonder: Where did this idea come from? Who started it? And is there a grain of truth there?

The answer lies in Democratic, not Republican politics, and in the bitter, exhausting spring of 2008.

Then, as Obama marched toward the presidency, a new suggestion emerged: That he was not eligible to serve.

That theory first emerged in the spring of 2008, as Clinton supporters circulated an anonymous email questioning Obama's citizenship.

"Barack Obama's mother was living in Kenya with his Arab-African father late in her pregnancy. She was not allowed to travel by plane then, so Barack Obama was born there and his mother then took him to Hawaii to register his birth," asserted one chain email that surfaced on the urban legend site Snopes.com in April 2008.