Back in January, a "march" from Miami to Washington on behalf of students who are illegal immigrants consisting of a grand total of four students somehow merited a 780-word article by reliably pro-amnesty reporter Julia Preston (By contrast, a massive anti-Obama rally that attracted over 100,000 people to the Capitol resulted in a 932-word piece.)

Now that those four brave souls have finally arrived, somehow unmolested, at the White House, the Times on Thursday settled for an un-bylined three-paragraph brief, "Long Walk For a Cause," and a medium-sized photo of the marchers by a Times photographer. 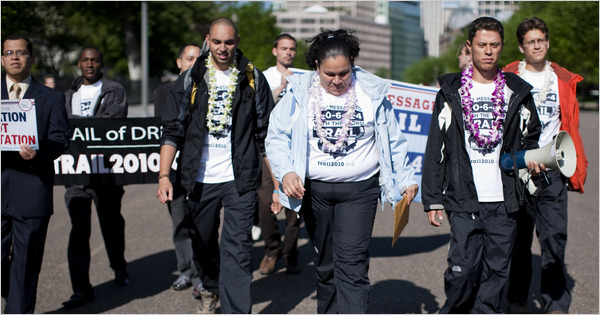 Either one of the marchers either somehow gained legal status while walking to Washington, or there's been an error in coverage. Preston's original article stated that three of the four protesters did not have legal-resident status. The follow-up mentions only two protesters lacking legal status.