Sorry, Founders: The 'terse and old' U.S. Constitution has been ruled out of date by Supreme Court reporter Adam Liptak for failing to provide such 'rights' as free health care. 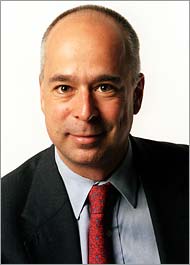 Liptak made the front of Tuesday's New York Times 'Side Bar' news analysis, ''We the People' Loses Followers,' the paper's most e-mailed and viewed news story of the morning.

Liptak arrives at his judgment via a new study by two law professors. The analysis, at least after being filtered through Liptak's coverage, seems to hew to the liberal ideology of the constitution as a 'living document,' (i.e. whatever a liberal wants it to mean), conflating genuine rights like freedom of religion with entitlements like free health care: 'But the Constitution is out of step with the rest of the world in failing to protect, at least in so many words, a right to travel, the presumption of innocence and entitlement to food, education and health care.'

The Constitution has seen better days.

Sure, it is the nation's founding document and sacred text. And it is the oldest written national constitution still in force anywhere in the world. But its influence is waning.

There are lots of possible reasons. The United States Constitution is terse and old, and it guarantees relatively few rights. The commitment of some members of the Supreme Court to interpreting the Constitution according to its original meaning in the 18th century may send the signal that it is of little current use to, say, a new African nation. And the Constitution's waning influence may be part of a general decline in American power and prestige.

In an interview, Professor Law identified a central reason for the trend: the availability of newer, sexier and more powerful operating systems in the constitutional marketplace. 'Nobody wants to copy Windows 3.1,' he said.

In a television interview during a visit to Egypt last week, Justice Ruth Bader Ginsburg of the Supreme Court seemed to agree. 'I would not look to the United States Constitution if I were drafting a constitution in the year 2012,' she said. She recommended, instead, the South African Constitution, the Canadian Charter of Rights and Freedoms or the European Convention on Human Rights.

The rights guaranteed by the American Constitution are parsimonious by international standards, and they are frozen in amber. As Sanford Levinson wrote in 2006 in 'Our Undemocratic Constitution,' 'the U.S. Constitution is the most difficult to amend of any constitution currently existing in the world today.' (Yugoslavia used to hold that title, but Yugoslavia did not work out.)

Americans recognize rights not widely protected, including ones to a speedy and public trial, and are outliers in prohibiting government establishment of religion. But the Constitution is out of step with the rest of the world in failing to protect, at least in so many words, a right to travel, the presumption of innocence and entitlement to food, education and health care.

Liptak failed to differentiate between rights retained by the people from the power of the government, like freedom of speech and religion, and entitlements, which are transfers of money and services established by government either via majority rule (i.e. voting) or judicial fiat. Examples include food stamps, welfare payments, and 'free' health care.

Liptak turned up his nose at the right conservatives would say protects all the other ones, the Second Amendment:

It has its idiosyncrasies. Only 2 percent of the world's constitutions protect, as the Second Amendment does, a right to bear arms. (Its brothers in arms are Guatemala and Mexico.)

Several 'rights" enshrined by the Times via the study (shown in a separate graphic) need unpacking. What exactly does the generic phrase 'Women's rights' entail? Access to abortion? And does 'Freedom of Movement' include the 'right' to other people's tax money in the form of welfare benefits, as the Supreme Court ruled in the late 1960s? Details from the University of Missouri-Kansas City School of Law: 'Shapiro v. Thompson (1968) considered the constitutionality of a state law that established a one-year residency requirement for welfare recipients. The Court struck down the law, finding it a violation of the "right to travel" (really, more the right to migrate).'