The Times suggests racist appeals were afoot at the Conservative Political Action Conference that kicked off Thursday morning in Washington. Reporter Kate Zernike appeared on the paper's "Caucus" blog Thursday to chide as offensive "some" speakers, by which she evidently meant one in particular, young author Jason Mattera: "CPAC Speaker Bashes Obama, in Racial Tones."

The teaser to the link repeated the plural: "At the conservative conference, some speakers are revving up the crowd in ways that could be considered offensive."

Evidently, mimicking comedian Chris Rock, as Zernike said Mattera did on a Thursday morning panel, is a scandalous use of "racial stereotypes" when done by a conservative. Interestingly, a quick tour of the blogosphere suggests that other left-wing sites, while trashing Mattera for his juvenile jokes about ugly liberal women, haven't gone so far as to accuse Mattera of race-baiting.

How can conservatives win the youth vote that overwhelmingly went for Barack Obama in 2008? At the Conservative Political Action Conference, apparently, some are betting on using racial stereotypes. 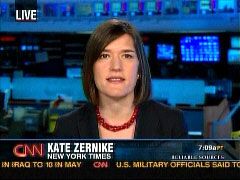 A panel for young conservatives featuring Jason Mattera, author of a forthcoming book called "Obama Zombies: How the Liberal Machine Brainwashed My Generation," making a joke about Obama "snorting cocaine."

He then mocked what he described, with a Chris Rock voice, as "diversity," including, he said, college classes on "cyber feminism" and "what it means to be a feminist new black man."

Offering up a slogan, he adopted the Chris Rock voice again: "Get your government off my freedom!"

Can we save our generation from Obama zombies, he asked. He answered himself by borrowing the president's campaign slogan: "Yes, my brothahs and sistahs. Yes we can!"

UPDATE: Mattera blasted Zernike's reporting in an interview with Ed Morrissey of Hot Air, suggested Zernike mistook his Brooklyn accent for "channeling Chris Rock" and called the racist charge "absurd...they see this race charge that they just make up out of thin air...nothing I actually said she could say, 'Oh that was racial.'"