Stolberg on Gingrich, the Eraser of Civility in D.C. 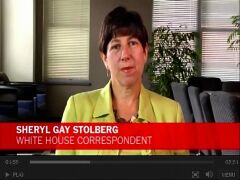 As she has before, Stolberg suggested Gingrich was to blame for today's current partisanship – 'many fault him for erasing whatever civility once existed in the capital.' As if Gingrich's attacks on Congressional Democratic leaders could be blamed for what liberal Democrats tried to do to Supreme Court nominee Clarence Thomas in 1991.

Newt Gingrich had an urgent warning for conservatives: Jim Wright, the Democratic speaker of the House, was out to destroy America.

It was April 1988, a month before Mr. Gingrich, an up-and-coming Republican congressman, shocked colleagues by pressing ethics charges against the powerful Mr. Wright. Now, he was singling out the speaker as a major obstacle in a coming 'civil war' with liberals.

Mr. Gingrich, Democrats and Republicans here agree, emerged as one of Washington's most aggressive practitioners of slash-and-burn politics; many fault him for erasing whatever civility once existed in the capital. He believed, and preached, that harsh language could win elections; in 1990, the political action committee he ran, Gopac, instructed Republican candidates to learn to 'speak like Newt,' and offered a list of words to describe Democrats - like decay, traitors, radical, sick, destroy, pathetic, corrupt and shame.

Those same qualities are now on display as Mr. Gingrich, a Republican candidate for president, turns his caustic tongue against Republicans and Democrats alike. He has tried to cut down Mitt Romney as promoting 'pious baloney,' branded President Obama 'the food stamp president' and mocked him for living on 'Planet Obama.' He has gone after the 'elite media' as well, denouncing the 'destructive, vicious, negative nature' of those whose questions he does not like.

Stolberg suggests that Gingrich only chose to focus on ethics because he couldn't use race, like preivous 'Southern Republicans' had (weren't Southern Democrats the one violently opposed to civil rights for blacks? Southern Republicans did not seal their dominance in Congress until 1994).

But Steven M. Gillon, a University of Oklahoma historian who has written a book about Mr. Gingrich and Mr. Clinton, offers another explanation. Southern Republicans in the post-civil rights era often used race as a wedge issue, Mr. Gillon said. But Mr. Gingrich, a one-time Rockefeller Republican who embraced integration, needed a different line of attack. 'He needed to find a wedge that would undermine the moral credibility of the Democratic Party,' Mr. Gillon said, adding, 'He could use ethics as sort of a bludgeon, and that's what he did.'

After describing how 'Things came to a head in May 1984,' when House Speaker Tip O'Neill was rebuked for attacking Gingrich for accusing Democrats of spreading 'communist propaganda' in a letter they had written to Nicaraguan dictator Daniel Ortega, Stolberg rounded up Republicans 'uneasy' with Gingrich.

Some Republicans were uneasy. Among them was Trent Lott of Mississippi, then the Republican whip. Mr. Lott had called for Mr. O'Neill's remarks to be stricken. Even so, he says he was uncomfortable with Mr. Gingrich's take-no-prisoners rhetorical style.

But again, some Republicans were uncomfortable. Mr. Gingrich, by then the Republican whip, was clearly angling to replace the House Republican leader, Robert H. Michel, viewed by many in his party as too accommodating to Democrats. Mr. Michel, now 88, recalls warning Mr. Gingrich that what goes around comes around.

'I would say, 'Newt, these fellows over there are not our enemy, they're our political adversaries,' ' Mr. Michel said. He reminded him that Democrats and Republicans often traded places in leadership. 'That could happen to you,' Mr. Michel recalled saying. 'If you don't treat them with respect, boy, the next time around, they have a chance to really put the shivs to you.'

Mr. Michel, it turned out, was right.

Over the course of two years, more than 80 charges - ranging from alleged tax violations to complaints that he used Gopac money to finance one of his own campaigns - were filed against Mr. Gingrich with the House Ethics Committee. The convoluted inquiry consumed official Washington, with Democrats saying he was getting what he deserved and Republicans calling it a political vendetta.

'Yes, he filed ethics charges against Speaker Wright, and I would concede that it wasn't just because Newt was out to clean up Congress,' said Dan Meyer, a former Gingrich aide. 'I think he used it as a partisan tactic, but the scale of the response was way out of proportion.'

In the end, nearly all of the charges were dismissed. But the ethics committee did find that Mr. Gingrich had used tax-exempt money to promote Republican goals, and given the panel inaccurate information for its inquiry.

Mr. Gingrich formally apologized, conceding he had brought discredit on the House. He had always regarded himself as a 'transformative figure' who would change the course of history, but on Jan. 21, 1997, he made history in another way.

The House voted 395-28 to reprimand him and fine him $300,000, making him the first speaker ever disciplined for unethical conduct.

Stolberg failed to note that the IRS cleared Gingrich in 1999.