Shear the Latest to Hear Nonexistent 'Let Him Die' Chants at G.O.P. Debate 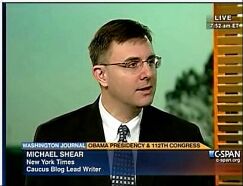 Give me liberty or… This debate will feature two fierce libertarians - Gary Johnson and Ron Paul - which should make for some interesting moments.

Mr. Johnson has been excluded from most of the recent debates because of his low standing in the polls, but Fox News organizers said he managed to exceed 1 percent in five recent polls, the minimum standard they set for participation.

Mr. Johnson, a former New Mexico governor, is probably best known for his support of the legalization of marijuana and other drugs - something Mr. Paul has also supported - so that issue is likely to re-emerge in this debate.

And following the last debate, when Mr. Paul was asked whether a young man without health insurance should be left to go without treatment - which was greeted with some chants of 'let him die' from the crowd - expect more questions along these lines.

Has anyone at the Times actually watched the debate clip? It was debate moderator Wolf Blitzer who actually used the words "let him die," when asking candidate Ron Paul a loaded question about letting a hypothetical man die for lack of health insurance. There is no auditory evidence anyone at all in the crowd shouted such a thing, much less enough people to form a constant 'chant.'

Columnist Paul Krugman on September 16 also falsely claimed 'the crowd erupted with cheers and shouts of 'Yeah!'' after Blitzer pressed Paul on the case of the hypothetical young man without health insurance, asking whether 'society should just let him die.'

Washington Post blogger Erik Wemple fact-checked the horrified liberal response of commentators like Krugman. This is how Wemple described what happened after debate host Wolf Blitzer raised his inflammatory question (you can watch the clip at the Post).

The voices that can be heard in the video - perhaps two or three of them - don't constitute an 'audience' reaction. There were 1,100 people in the crowd. The episode is the clumsy work of a few loons or meatheads in the audience.