Kim Severson, former Times food writer, is now the paper's Atlanta bureau chief, reported Sunday on a smattering of boycotts by gay activists against the Atlanta-based fast food outlet Chick-fil-A, which has many restaurants in the South.

The controversy involves the conservative religious views of the family owners - specifically, the restaurant sponsoring a local marriage seminar from a Pennsylvania group perceived as anti-gay: "A Chicken Chain's Corporate Ethos Is Questioned by Gay Rights Advocates." The story brings two Severson strands together: Foodie Severson is also openly gay, supports gay marriage, and has served as vice-president of the National Gay and Lesbian Journalists Association. 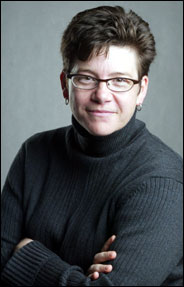 The Times proves once again it is not overly concerned with the religious sensibilities of Christians with its cavalier reference to "Jesus chicken."

The Chick-fil-A sandwich - a hand-breaded chicken breast and a couple of pickles squished into a steamy, white buttered bun - is a staple of some Southern diets and a must-have for people who collect regional food experiences the way some people collect baseball cards.

New Yorkers have sprinted through the airport here to grab one between flights. College students returning home stop for one even before they say hello to their parents.

But never on Sunday, when the chain is closed.

Nicknamed "Jesus chicken" by jaded secular fans and embraced by Evangelical Christians, Chick-fil-A is among only a handful of large American companies with conservative religion built into its corporate ethos. But recently its ethos has run smack into the gay rights movement. A Pennsylvania outlet's sponsorship of a February marriage seminar by one of that state's most outspoken groups against homosexuality lit up gay blogs around the country. Students at some universities have also begun trying to get the chain removed from campuses.

The outcry moved the company's president, Dan T. Cathy, to post a video on the company's Facebook fan page to "communicate from the heart that we serve and value all people and treat everyone with honor, dignity and respect," said a company spokesman, Don Perry.

For organizations like Georgia Equality, the state's largest advocacy group for gay, lesbian, bisexual and transgender issues, the free sandwiches offer an opportunity for organizing.

On a petition posted on the Web site change.org, it asks the company to stop supporting groups perceived as anti-gay, including Focus on the Family, an international nonprofit organization that teamed up with Chick-fil-A a few years ago to give away CDs of its Bible-based "Adventures in Odyssey" radio show with every kid's meal.

Severson provided an adequate mix of "soundbites" from both supporters and opponents of the boycott, while letting a local opponent who "believed that people should make informed decisions about their food" have the last word.

ABC News evidently picked up on Severson's Sunday morning article for its own piece on Sunday night.