Public Editor Asks if NYT Reporters Should Fact-Check, But They Already Do (the GOP, Anyway)

New York Times' Public Editor Arthur Brisbane made waves Thursday in a rare post to his nytimes.com blog asking 'Should The Times Be a Truth Vigilante?' What he was really asking: Should the Times be more vigilant in fact-checking politicians? 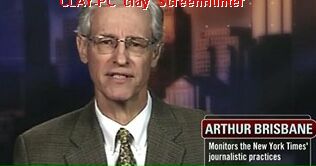 And only Republican politicians, judging by the two examples he selected (claims that were relatively immune to being checked in the first place) and the paper's history, which is replete with ardent defenses by reporters of liberal policy against 'misleading exaggeration' by Republicans, but lacks any such vigilance when it comes to Democratic statements. Brisbane wrote:

I'm looking for reader input on whether and when New York Times news reporters should challenge 'facts' that are asserted by newsmakers they write about.

One example mentioned recently by a reader: As cited in an Adam Liptak article on the Supreme Court, a court spokeswoman said Clarence Thomas had 'misunderstood' a financial disclosure form when he failed to report his wife's earnings from the Heritage Foundation. The reader thought it not likely that Mr. Thomas 'misunderstood,' and instead that he simply chose not to report the information.

Another example: on the campaign trail, Mitt Romney often says President Obama has made speeches 'apologizing for America,' a phrase to which Paul Krugman objected in a December 23 column arguing that politics has advanced to the 'post-truth' stage.

As an Op-Ed columnist, Mr. Krugman clearly has the freedom to call out what he thinks is a lie. My question for readers is: should news reporters do the same?

If so, then perhaps the next time Mr. Romney says the president has a habit of apologizing for his country, the reporter should insert a paragraph saying, more or less:

'The president has never used the word 'apologize' in a speech about U.S. policy or history. Any assertion that he has apologized for U.S. actions rests on a misleading interpretation of the president's words.'

Actually, the Times does quite a bit of this 'fact-checking' now. The difference? It's almost solely done against Republicans candidates and members of Congress, not President Obama or congressional Democrats.

Reporter Richard Oppel Jr. last November 18 wrote that it was a 'falsehood' for Republican candidate Rick Perry to call Obama an elitist, huffing that 'Mr. Obama, whose background could be considered no better off than middle class, was raised partly by a single mother who at times, he has said, was on food stamps. He also achieved the pinnacle of legal education, winning election as president of the Harvard Law Review.'

John Broder, Nicholas Confessore, and Jackie Calmes co-wrote 'Attacking the Democrats, but Not Always Getting It Right' on September 8 after the Republican debate at the Reagan Library, defending Obama from GOP attacks on his stance on oil drilling and the viability of Social Security against claims it was a 'Ponzi scheme.'

Covering the 2010 Pennsylvania Senate campaign of Pat Toomey, David Herszenhorn sniffed in an October 11, 2010 story: 'Some of his assertions are fair. Some are a stretch but defensible. Others are false, like Mr. Toomey's claim that a recent law passed by Congress to aid small businesses would have the federal government buy a stake in local banks. The bill would channel government-backed loans through the banks. Details, however, are beside the point. Anger is defining this race.'

Herszenhorn's zeal extended to citizen Scott Wagner, who raises money for Republicans and who 'stood up with a printout of the entire health care law and offered it to Mr. Sestak,' saying the plan 'is not good for business.' Unfortunately for Wagner, he had failed to memorize chapter and verse his specific personal grievances with the federal government:

In an interview, Mr. Wagner expressed deep anger at the government. 'We're being regulated to death,' he said. But when asked for examples, he offered only I.R.S. Form 2290, which is used to file the 'heavy use vehicle tax' - a tax enacted in 1982 - and the I-9 immigration form to prove an employee is legally allowed to work in the United States, which has been required since 1986.

On the other side, there is no such hyper-vigilance against questionable liberal arguments from the White House. In fact, White House reporter Jackie Calmes has always stated as fact the dubious, accounting gimmick-driven statistics from the Congressional Budget Office claiming Obama-care will actually save money, and chided Republicans for not agreeing.