The romantic treatment of the leftist sit-in at Wall Street by Michael Kimmelman in his Sunday Review 'news analysis' 'The Power of Place in Protest" was bad enough, with talk of Aristotle and 'the size of an ideal polis' and how 'Zuccotti Park has in fact become a miniature polis, a little city in the making.' But the real offense came in the New York Times' choice of comparison photos.

The think-piece by the paper's architectural critic was accompanied by archive photos of other massive legendary protests; Kent State in 1970; the Central Park protest against the Vietnam War in 1967; the famous man in front of the tank in Tiananmen Square in 1989; the fall of the Berlin Wall that same year. Of more recent vintage was the Tahrir Square protest in Cairo and Occupy Wall Street.

That's pretty flattering company – as if standing up to Chinese Communist tanks was comparable to eating donated food in Lower Manhattan for a month. It's also quite different from the kind of historical image the Times used in its Tea Party coverage. 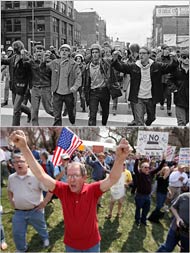 A March 28, 2010 Times story by Benedict Carey carried an ominous title cribbed from the famous scene in the movie "Network," 'RAGE's DNA: Mad As Hell. And...' The online headline was even blunter: 'When Does Political Anger Turn to Violence?'

The story was accompanied by a photo illustration of an open book of matches, one of them lit.

There was also a really strange pair of photos on the jump page: an archive photo, courtesy of Getty Images, of the late-1960s left-wing domestic terrorist group The Weathermen, directly above a similar picture of marching Tea Party protesters. The caption suggested the two movements share some DNA: "VARYING DEGREES OF RAGE The Weathermen, including Bill Ayers, second from right, during the Days of Rage in 1969, and anti-health reform protesters in Washington on Sunday."