New York Times media reporter Brian Stelter may have let his personal views color his enthusiastic reception of the popularity of Occupy Wall Street's '99 percent' motif, but he was right that it is cropping up in a lot of places these days, especially among liberal activists. It has certainly sunken into the collective consciousness of New York Times journalists. 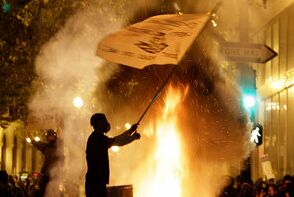 One prominent example: The front page of Monday's Times featured a story by William Broad on affluent tourists taking trips on a mini submarine for a view of the Titanic, 'Plunging Deep (in Pockets) to See Titanic at 100.'

Down, down, down you go, for two and a half hours, jammed with two other people in a tiny submersible, all the way to the bottom of the Atlantic Ocean - and all for a glimpse, through a five- or eight-inch porthole, of the ravaged remains of the once-grand ship where the Astors and the Strauses played, dined and, in some cases, died.

The trip is not for the claustrophobic, nor the 99 percent: a two-week cruise that includes one dive, lasting eight to 10 hours, costs $60,000.

The politically freighted phrase has found its way into spots in the paper both likely (a report on banker's complaints by Jesse Eisinger of the liberal nonprofit ProPublica) and unlikely (a review of three books about the designer Coco Chanel).

The November 30 story 'When the Knives Come Home' by food writer Julia Moskin opened: 'In the food world, chefs are the 1 percent, and the rest of us are the 99 percent.'

The November 26 Letters to the Editor page was headlined 'Inequality in the Air: The 1 Percent and the 99,' with several letters from aggrieved liberals taking umbrage with a previous Times story on extra perks for first-class airline passengers.