The front page of Wednesday's Times featured a huge Associated Press photo of President Obama greeting troops on his surprise trip to Baghdad. The caption (from the print edition, emphasis in original):

In Unexpected Visit to Iraq, Obama Wins Troops' Cheers - Military personnel at Camp Victory in Baghdad applauded President Obama on Tuesday when he said "It is time for us to transition to the Iraqis." 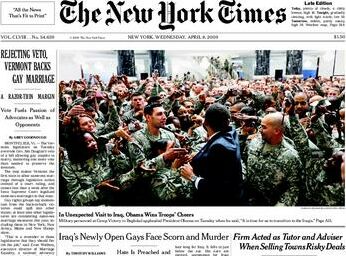 That teased a favorable story about Obama's visit on Page 11, which included another photo of Obama and the troops, with a more straightforward caption (again from the print):

President Obama spoke to American troops at Camp Victory, Iraq, on Tuesday. The president said that it was time for Iraqis "to take responsibility for their country and for their sovereignty."

Compare the photographic enthusiasm the Times showed over Obama's first trip as president to Iraq to the coolness with which the paper's photo-caption writers greeted President George W. Bush's dramatic first, secret visit to Iraq on Thanksgiving Day 2003, which occurred during intense wartime hostilities.

While even Bush-hostile reporter Elisabeth Bumiller admitted in her front-page story that the president was surrounded by "stunned, whooping soldiers," none of that enthusiasm made it into the photocaptions from Bush's visit to Baghdad.

The caption accompanying a front-page photo of Bush carrying a turkey among troops was coolly descriptive:

And a photo caption that evidently appeared on the article's jump page was self-obsessed and petulant. According to the Times archive (the photo itself is not online), the text read:

President Bush posed for a photograph yesterday during his surprise visit to American troops at the airport in Baghdad, Iraq. Few journalists were told of the trip or allowed to cover it.