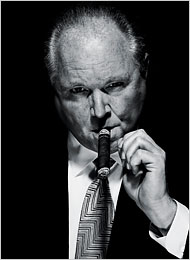 The packaging was unpromising. The headline, "Late-Period Limbaugh," and the teaser:

Bush is wildly unpopular. McCain is nobody's idea of a movement guy. Conservatism is cracking up. What's the king of talk radio to do?

suggested the article would revel in Limbaugh's supposed decline in influence (perhaps the only way to tempt the paper's liberal readership to actually read a longarticle about Limbaugh).Those details,along with the slightly sinister black-and-white photos of Limbaugh puffing on a cigar, will understandably make Limbaugh fans brace for the usual uncomprehending liberal slant.

But writer Zev Chafets treated his subject as a human personality, with a lot of help from the consistently self-effacing Limbaugh. NewsBusters Noel Sheppard correctly pointed out that liberal readers "might just come away with a little more respect for the man they consider Public Enemy Number One."

As a bonus, Chafets reported the findings from the Pew Research Center showing that, on a series of questions measuring news knowledge, Limbaugh listeners scored higher than National Public Radio listeners.

A couple of quibbles. Chafets writes:

Limbaugh has been a factor in every national election of the past 20 years, but not since the mid-1990s has he been so prominent. Democrats have blamed him for everything from invading their primaries to starting scurrilous rumors about Michelle Obama. Limbaugh denies the latter accusation, but he happily embraces the former.

If Chafets is referring to the accusation about the imaginary clip showing Michelle Obama ranting about "Whitey," Limbaugh had nothing to do with starting the rumor. It was initiated by pro-Hillary blogger Larry Johnson.

And this characterization sounded unnecessarily "harsh":

A secret of Limbaugh's success is that his uncompromising, often harsh ideas are offset by a basically friendly temperament. He is less like his angry father than his mature role models, Buckley and Reagan, for whom sociability and fun were integral to their conservative world view.