On Sunday Jeffrey Rosen reviewed "Until Proven Innocent - Political Correctness and the Shameful Injustices of the Duke Lacrosse Rape Case," by Stuart Taylor & KC Johnson, a book that, among bringing other injustices surrounding the case to light, also excoriates the mainstream press's shoddy coverage, much of which presumed the guilt of the three white lacrosse players. The case was later proven to be utterly false. 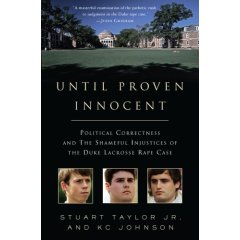 Rosen, a law professor at George Washington University, called the book "riveting." Yet he devoted just two sentences to the frequent passages that rip apart the Times' shoddy coverage of the case, taking particular aim at reporter Duff Wilson and columnist Selena Roberts.

"Nifong's sins are now well known, but Taylor and Johnson argue that he was aided and abetted by the news media and the Duke faculty. They are withering about the 'lynch mob mentality' (in the words of a defense lawyer) created by bloviating cable news pundits on the left and the right. But they are also sharply critical of what they call the one-sided reporting of the nation's leading newspapers, including The New York Times. With a few exceptions, the authors suggest, The Times's coverage consistently showed a 'pro-Nifong bias,' most notably in a front-page article apparently trying to resurrect the case after it seemed on the verge of collapse."

Times sports reporter Joe Drape could have been an early hero for the truth, but when Drape began to divert from the favored storyline of Times editors, he was replaced by another reporter, Duff Wilson, who hewed more closely to the pro-prosecution slant preferred by the liberal editors at the Times, who viewed the affair solely through the politically correct prism of race/sex/class. Wilson proceeded to get everything comically if not tragically wrong about the case, uncorrected factual errors and burying exculpatory evidence.

"...the New York Times initially stood out for its reasonably balanced coverage. The first Times reporter to conduct detailed interviewing about the evidence in the rape case was sportswriter Joe Drape....Drape's March 31 article especially stood out from the pack. He highlighted comments by defense lawyers challenging the accuser's credibility, vowing that the DNA would prove the lacrosse players innocent, and pointing the fishy features of Kim Roberts's 911 call....the more he pushed, the more Drape came to believe that Mangum was not credible and her rape charge was probably false....Encouraged by Drape's performance, Thomas provided all the evident of innocence then in his possession to the Times reporter. Thomas was expecting a great article, but in early April Drape called him and said there would be no article because he was 'having problems with the editors.' 'From my perspective,' Thomas recalled later, 'the interest of the Times in defense information came to a slow crawl with the departure of Drape. And soon after Drape privately told people at Duke and, presumably, at the Times that this looked like a hoax, his byline disappeared from the Duke lacrosse story. The word among people at Duke and defense supporters, including one who later ran into Drape at a race track, was that the editors wanted a more pro-prosecution line. They also wanted to stress the race-sex-class angle without dwelling on evidence of innocence. They got what they wanted from Drape's replacement, Duff Wilson, whose reporting would become a journalistic laughingstock by summer..."

Taylor and Johnson have another revealing insight into the politicization inside the Times. After the paper's non-liberal columnist David Brooks penned "The Duke Witch Hunt" on May 29, 2006:

"...inside the New York Times, it was widely shrugged off as of little interest. Why? Because Brooks' brand of conservatism- so moderate that he rooted for the Democrats to win control of Congress in 2006 - still put him far to the right of almost every other writer and editor at the Times."

Most notorious was the 5,600-word front-pageepic that appeared August 25, 2006,intended to counter the perception, slowly sinking in among the mainstream press, that the "rape"had in fact never happenedTaylor eviscerated Wilson's storyat the time, and the authors do a post-mortem on the infamous piece for the book.

"Duff Wilson had been very much part of the journalist pack committed to the now increasingly discredited presumption-of-guilt approach....The big piece [written with Jonathan Glater] ran on August 25, jumping from the front page to a full page inside the paper and totaling 5,600 words. The headline was: 'Files in Duke Case Give Details but No Answers'....[they] gave unwarranted credence to contrary evidence of dubious credibility....the article was littered with inaccuracies, such as its claim that, just after midnight, 'the dancers stopped. An argument ensued. Using a racial epithet, someone yelled that they had asked for white dancers, not black ones. That much is agreed. It was 12:04 A.M. March 14.' In fact, far from 'agreed,' the Times claim that a racial epithet was hurled at the women inside the house was clearly false....But the most misleading aspects of the article were its selective presentation of evidence and omissions."

The authors follow up with a comprehensive analysis of the story's grievous errors of fact and chronology.

A stark contrast to the paper's presumption of guilt in the Duke lacrosse (non)rape case appeared in the paper on Tuesday in a "News Analysis" by Victoria Burnett concerning the case of Kate and Gerry McCann and their four-year-old daughter Madeleine, who disappeared in Portugal on the night of May 3.

A strong presumption of innocence permeated the Times' piece, with Burnett emphasizing the parallels between the McCann disappearance and the case of Lindy Chamberlain, whose infant was killed in the Australian outback in 1982. The case was made into the movie "A Cry in the Dark." Burnett said the Chamberlain case "finds disquieting echoes" in the McCann case: "Mrs. Chamberlain's experience offers cautionary notes on how flawed evidence and speculation can turn victim into convict."

Too bad the Times didn't heed that counsel before painting the Duke lacrosse playersas guilty of rape.