Reporter Adam Nagourney, now Los Angeles bureau chief for the Times, returned to his old political beat for Monday's off-lead story co-written with David Herszenhorn. The theme is one of Nagourney's favorites; Republicans overplaying their hand and risking citizen backlash: "As Republicans See A Mandate, Others See Risk - Echo Of '08 Democrats - Backlash Could Loom on Cuts to Budget and Union Challenges." 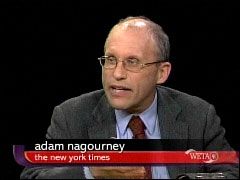 Nagourney claimed "the Democratic Party can clearly claim a mandate" after the 2006 elections in which the party gained 25 seats in the House. But on Monday he argued the G.O.P. lacks a mandate, even after an election where the party gained 63 seats and took over the House.

In Congress and in statehouses, Republican lawmakers and governors are claiming a broad mandate from last year's elections as they embark on an aggressive campaign of cutting government spending and taking on public unions. Their agenda echoes in its ambition what President Obama and Democrats tried after winning office in their own electoral wave in 2008.

In Washington, the House approved more than $60 billion in spending cuts before dawn on Saturday that would hit virtually every area of government, setting up a showdown with Senate Democrats and the White House.

In New Jersey, Gov. Chris Christie, who is embroiled in a political fight with the teachers' union, is expected to call for drastic steps on Tuesday to close a roughly $10 billion budget gap.

And nowhere has a newly elected Republican flexed more muscle or drawn a more severe backlash than in Wisconsin, where Gov. Scott Walker is pushing to curtail collective bargaining rights for state employees. "For us, this is about balancing the budget," Mr. Walker said on "Fox News Sunday." "We've got a $3.6 billion budget deficit. We are broke. Just like nearly every other state across the country, we're broke."

But in the view of officials from both major political parties, Republicans may be risking the same kind of electoral backlash Democrats suffered after they were perceived as overreaching.

Public surveys suggest that most voters do not share the Republicans' fervor for the deep cuts adopted by the House, or for drastically slashing the power of public-sector unions. And independent voters have historically been averse to displays of political partisanship that have been played out over the last week

(Nagourney writes this same kind of story after every bout of Republican electoral success.)

Other Republicans are making similar efforts. In Ohio, Gov. John Kasich has signaled support for a law that would end collective bargaining rights for state workers and restrict those rights for teachers, police officers, firefighters and other local government employees. In Florida, Gov. Rick Scott is demanding that public workers pay 5 percent of their salaries toward their pensions.

At the very least, the huge demonstrations in Wisconsin over Mr. Walker's efforts suggest that the Republicans have succeeded in doing what Mr. Obama was unable to do last year: energize the Democratic base.

In addition, several Democrats pointed to Republican efforts to cut back abortion rights as another example of an issue that made them subject to the same criticism that Democrats faced: pursuing their party's base agenda while ignoring the central concern of Americans, jobs.

Odd that the Times only admits to Democrat overreach in retrospect; the paper gave no warnings and paid little attention to the dangers of Democratic overreaching when the party was pushing its liberal version of health-care "reform" in 2009-2010.