Krugman Gets Angry Over Fake Quote, But His Real Ones Are Just As Bad

A fake Paul Krugman quote, allegedly from the columnist's account at Google Plus, made the rounds yesterday: "People on Twitter might be joking, but in all seriousness, we would see a bigger boost in spending and hence economic growth if the earthquake had done more damage." 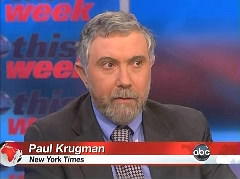 Carlos Graterol, a Florida State University graduate, later admitted to impersonating Krugman at Google Plus to mock the economist-turned-columnist's Keynesian embrace of the 'broken-window' fallacy – the idea that acts of destruction actually stimulate the economy by forcing spending on things like rebuilding. Of course, money that is spent on rebuilding can no longer be spent on other, more productive things.

I hear that the not-so-good people at National Review are attacking me over something I said on my Google+ page. Except, I don't have a Google+ page...Apparently some people can't find enough things to attack in what I actually say, so they're busy creating fake quotes...So if you see me quoted as saying something really stupid or outrageous, and it didn't come from the Times or some other verifiable site, you should probably assume it was a fake.

Actually, as Allahpundit at Hot Air pointed out, the fake Krugman quote isn't out of line from some of the 'stupid and outrageous' things Krugman has actually written and said over the years.

Three days after the September 11 attacks, Krugman sketched out a truly offensive version of the discredited 'broken-window hypothesis' in his Times column, suggesting 'potentially...two favorable effects' from the 9-11 attacks, including a 'sudden' need for 'some new office buildings.'

It seems almost in bad taste to talk about dollars and cents after an act of mass murder. Nonetheless, we must ask about the economic aftershocks from Tuesday's horror.

These aftershocks need not be major. Ghastly as it may seem to say this, the terror attack - like the original day of infamy, which brought an end to the Great Depression - could even do some economic good. But there are already ominous indications that some will see this tragedy not as an occasion for true national unity, but as an opportunity for political profiteering.

So the direct economic impact of the attacks will probably not be that bad. And there will, potentially, be two favorable effects.

First, the driving force behind the economic slowdown has been a plunge in business investment. Now, all of a sudden, we need some new office buildings. As I've already indicated, the destruction isn't big compared with the economy, but rebuilding will generate at least some increase in business spending.

More recently, Krugman opined on CNN that the threat of a space alien invasion would provide a nicestimulus to the economy.