Even in victory, the legitimacy of the Tea Party movement is questioned. Rand Paul's win in the Republican Senate primary in Kentucky on Tuesday was portrayed in a negative, wait-and-see-fashion by reporter Kate Zernike: "Paul's Victory Poses Test for Tea Party on Defining Principles Beyond Protest." 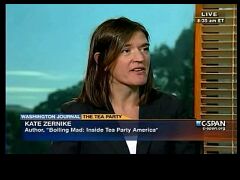 Rand Paul's win in the Republican Senate primary here is the first authentic Tea Party victory - a candidate from the movement, powered by it.

But Mr. Paul's campaign from now to November will present the young movement its toughest test yet - as voters focus on what the Tea Party is for, rather than what it is against.

Voters will have to decide whether they will embrace what Mr. Paul acknowledges are "tough choices" - like his proposals to raise the age of Social Security eligibility, to slash spending deeply enough to balance the budget every year even while cutting taxes and relying more on charity to provide the social services that the government has since the New Deal.

Zernike at least took a more complete view of Tea Party activists than she did in a profile last month, when she summarized them as all-white reactionaries:

They tend to be white and male, with a disproportionate number above 45, and above 65. Their memories are of a different time, when the country was less diverse.

And his campaign is a microcosm of the unlikely, and sometimes contradictory, mashup that created the Tea Party movement, one that brings together idealistic and largely young supporters who espouse the small-government ideas of the Austrian economic school and public choice theory, with largely older voters who fervently want change in Washington but who also think big government programs like Social Security and Medicare are worth the costs.

Democrats are trying to portray Republicans who win with Tea Party support as being out of the mainstream.

They wasted little time in calling Mr. Paul an "extreme candidate," as Tim Kaine, the chairman of the Democratic National Committee, said. The Democratic Senatorial Campaign Committee released a Web advertisement highlighting Mr. Paul's statements that he would eliminate the Department of Education, cut taxes on corporations and capital gains and raise the retirement age, even as he has said that he does not want to cut payments to doctors like himself who take Medicare patients.

"While Kentucky struggles with a still recovering economy and with high unemployment throughout the state," the committee said in a statement, "Rand Paul's policies are more about helping himself than helping Kentuckians."

Voting in the Republican primary in Mr. Paul's precinct here, Martha McKenzie, 84, said Mr. Paul was too idealistic. "He says things, and I wish they could be that way, but I know they're not," she said. "I don't mind paying taxes. Not when it's to help people. We didn't get this way in a few years, we're not going to get out of it in a few years. You can't cut things all of a sudden, not without hurting people."

Her niece Donna Wolbe, 57, said she worries about what she called Mr. Paul's "my-way-or-the-highway" politics. "You want to feel like the person you're voting for is going to be effective," she said. "You're not effective if you alienate people."