Matt Bai, a major contributing writer for the Times Sunday Magazine, denigrated John McCain's service in Vietnam in his big cover profile, "The McCain Doctrines," suggesting his five years spent isolated in a POW camp meant he didn't learn the correct liberal lessons from the Vietnam War, resulting in his support for the Iraq War. 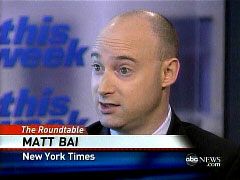 While the Times found Sen. John Kerry's service in Vietnam gave him credibility on his opposition to the Iraq War, McCain's five years spent isolated in a POW camp has evidently cursed him with a narrow perspective of America, right or wrong. Explaining why McCain still supports the Iraq War, Bai wrote:

Among his fellow combat veterans in the Senate, past and present, he is the only one who has continued to champion the war in Iraq; by contrast, Kerry, Webb and Hagel have emerged in the years since the invasion as unsparing critics of American involvement there. (In a new book, Hagel, who voiced deep concerns about Iraq even as he voted for the war resolution in 2002, predicts that the war will turn out to be "the most dangerous and costly foreign-policy debacle in our nation's history.") This divide among old allies may be the inevitable result of a protracted war that has cleaved plenty of American households and friendships. But it may also be that the war is revealing underlying fractures among the Senate's Vietnam coalition.

There is a feeling among some of McCain's fellow veterans that his break with them on Iraq can be traced, at least partly, to his markedly different experience in Vietnam. McCain's comrades in the Senate will not talk about this publicly. They are wary of seeming to denigrate McCain's service, marked by his legendary endurance in a Hanoi prison camp, when in fact they remain, to this day, in awe of it. And yet in private discussions with friends and colleagues, some of them have pointed out that McCain, who was shot down and captured in 1967, spent the worst and most costly years of the war sealed away, both from the rice paddies of Indochina and from the outside world. During those years, McCain did not share the disillusioning and morally jarring experiences of soldiers like Kerry, Webb and Hagel, who found themselves unable to recognize their enemy in the confusion of the jungle; he never underwent the conversion that caused Kerry, for one, to toss away some of his war decorations during a protest at the Capitol. Whatever anger McCain felt remained focused on his captors, not on his own superiors back in Washington.

Not all of McCain's fellow veterans subscribe to the theory that the singularity of his war experience has anything to do with his intransigence on Iraq. (Bob Kerrey, for one, told me that while he was aware of this argument, he has never believed it.) But some suspect that whatever lesson McCain took away from his time in Vietnam, it was not the one that stayed with his colleagues who were "in country" during those years - that some wars simply can't be won on the battlefield, no matter how long you fight them, no matter how many soldiers you send there to die.

"McCain is my friend and brother, and I love him dearly," Max Cleland, Georgia's former Democratic senator, told me when we talked last month. "But I think you learn something fighting on the ground, like me and John Kerry and Chuck Hagel did in Vietnam. This objective of 'hearts and minds'? Well, hello! You didn't know which heart and mind was going to blow you up!

"I have seen this movie before, and I know how it ends," says Cleland, who lost three of his limbs to an errant grenade during the battle of Khe Sanh. "With thousands dead and tens of thousands more injured, and years later you ask yourself what you were doing there. To the extent my friend John McCain signs on to this, he is endangering America's long-term interests, and probably his own election in the fall."

What Bai doesn't get into: That John Kerry came back home and, as a spokesman for Vietnam Veterans Against the War, infamously denigrated his fellow troops before the Senate Foreign Relations Committee in 1971. An excerpt from Kerry's testimony:

I would like to talk, representing all those veterans, and say that several months ago in Detroit, we had an investigation at which over 150 honorably discharged and many very highly decorated veterans testified to war crimes committed in Southeast Asia, not isolated incidents but crimes committed on a day-to-day basis with the full awareness of officers at all levels of command....They told the stories at times they had personally raped, cut off ears, cut off heads, taped wires from portable telephones to human genitals and turned up the power, cut off limbs, blown up bodies, randomly shot at civilians, razed villages in fashion reminiscent of Genghis Khan, shot cattle and dogs for fun, poisoned food stocks, and generally ravaged the countryside of South Vietnam in addition to the normal ravage of war, and the normal and very particular ravaging which is done by the applied bombing power of this country.

That didn't stop Kerry from turning the 2004 Democratic National Convention into a military parade, and he exploited his three Purple Hearts he was awarded in Vietnam for all they were worth - until the Swift Boat Veterans turned the tables by credibly questioning their legitimacy.