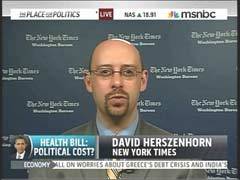 In Indiana, Representative Mike Pence, the No. 3 House Republican, complains about "runaway federal spending on steroids."

In Alaska, the Republican candidate for the Senate, Joe Miller, talks about "out of control spending." And in Arizona, Jesse Kelly, a Republican hoping to oust Representative Gabrielle Giffords, says, "We're spending our way into bankruptcy."

If there is a single message unifying Republican candidates this year, it is a call to grab hold of the federal checkbook, slam it closed and begin to slash spending. To bolster their case that action is needed, Republicans are citing major legislation over the four years that Democrats have controlled Congress, notably the financial system bailout, the economic stimulus and the new health care law.

But while polls show that the Republicans' message is succeeding politically, Republican candidates and party leaders are offering few specifics about how they would tackle the nation's $13.7 trillion debt, and budget analysts said the party was glossing over the difficulty of carrying out its ideas, especially when sharp spending cuts could impede an already weak economic recovery.

Herszenhorn stated that "federal budget statistics show that Republican policies over the last decade, and the cost of the two wars, added far more to the deficit than initiatives approved by the Democratic Congress since 2006." He also correctly pointed out the enormous costs of the Medicare prescription drug program signed by Bush.

But Herszenhorn made the liberal assumption that tax cuts are an "astronomical" cost to the government and not a spur of economic growth, and dubiously argued that Obama-care would actually save money.

On the campaign trail, many Republicans are calling for a repeal of the health care law, a step that would actually increase the deficit by more than $100 billion over 10 years, according to the Congressional Budget Office, by eliminating some cost-saving provisions - a fact that typically goes unmentioned. Republicans counter that the full cost of the health care law will only kick in later, so that repeal would save money in the long run.

Republicans indeed often go vague when it comes to specific spending cuts. But then he went further, twice injecting into the news story his opinion that Republican campaign rhetoric on spending is "simplistic."

A small number of Republicans, notably Representative Paul Ryan of Wisconsin, have called for sharp reductions to Social Security and Medicare to change the nation's fiscal trajectory. But party leaders and candidates on the stump have largely shunned those proposals, which risk alienating core segments of voters.

As a result, the campaign rhetoric has been largely general if not simplistic.

In Congress, an early test of Republican resolve will come shortly after the election when lawmakers return to Washington for a lame-duck session. Democrats will almost certainly try to pass the regular appropriations bills, or an omnibus spending measure for the 2011 fiscal year.

At that point, given the likely difficulties of enacting their own proposed cuts, Republicans will have to choose between allowing Democrats to adopt the spending measures for 2011 and being able to criticize Democrats for their choices (while also potentially securing some spending increases favored by Republicans) or using the power of Senate Republicans to filibuster and delay action on the spending bills until the new Congress takes over next year.

Of course, who actually serves in the next Congress could depend on the more simplistic discussion of fiscal issues now dominating the airwaves in campaign commercials.