Great minds think alike, and so do liberal Times columnists. This weekend, Charles Blow and Frank Rich tackled the same subject (Obama-care) from the same angle (Tea Party opposition is based on racism, not health care concerns).

Let's start off on Sunday, with the always over-dramatic former drama critic Frank Rich, "The Rage Is Not About Health Care."

After a crack about "perennially copper-faced Republican leader John Boehner," Rich got serious, or what passes for serious with him:

But the laughs evaporated soon enough. There's nothing entertaining about watching goons hurl venomous slurs at congressmen like the civil rights hero John Lewis and the openly gay Barney Frank. And as the week dragged on, and reports of death threats and vandalism stretched from Arizona to Kansas to upstate New York, the F.B.I. and the local police had to get into the act to protect members of Congress and their families.

How curious that a mob fond of likening President Obama to Hitler knows so little about history that it doesn't recognize its own small-scale mimicry of Kristallnacht. The weapon of choice for vigilante violence at Congressional offices has been a brick hurled through a window. So far.

Before Rich goes even crazier with Nazi comparisons, Times Watch would point to instances of vandalism at GOP campaign offices during the 2004 campaign that were studiously ignored by the Times.

Rich implausibly argued that Obama-care is not that massive a change, despite reporter Helene Cooper's insistence in the same edition of Week in Review that it was a "historic achievement." Rich explained:

No less curious is how disproportionate this red-hot anger is to its proximate cause. The historic Obama-Pelosi health care victory is a big deal, all right, so much so it doesn't need Joe Biden's adjective to hype it. But the bill does not erect a huge New Deal-Great Society-style government program. In lieu of a public option, it delivers 32 million newly insured Americans to private insurers. As no less a conservative authority than The Wall Street Journal editorial page observed last week, the bill's prototype is the health care legislation Mitt Romney signed into law in Massachusetts. It contains what used to be considered Republican ideas.

Rich then unloaded a tiresome recount of standard political metaphors that the left suddenly thinks are threatening, along with the discredited allegation that a black congressman, Emanuel Cleaver, was spit on by a demonstrator (a video shows the "spitter" cupping his hands around his mouth as a makeshift microphone and may have inadvertently sprayed Cleaver with saliva).

Yet it's this bill that inspired G.O.P. congressmen on the House floor to egg on disruptive protesters even as they were being evicted from the gallery by the Capitol Police last Sunday. It's this bill that prompted a congressman to shout "baby killer" at Bart Stupak, a staunch anti-abortion Democrat. It's this bill that drove a demonstrator to spit on Emanuel Cleaver, a black representative from Missouri. And it's this "middle-of-the-road" bill, as Obama accurately calls it, that has incited an unglued firestorm of homicidal rhetoric, from "Kill the bill!" to Sarah Palin's cry for her followers to "reload." At least four of the House members hit with death threats or vandalism are among the 20 political targets Palin marks with rifle crosshairs on a map on her Facebook page.

If Obama's first legislative priority had been immigration or financial reform or climate change, we would have seen the same trajectory. The conjunction of a black president and a female speaker of the House - topped off by a wise Latina on the Supreme Court and a powerful gay Congressional committee chairman - would sow fears of disenfranchisement among a dwindling and threatened minority in the country no matter what policies were in play. It's not happenstance that Frank, Lewis and Cleaver - none of them major Democratic players in the health care push - received a major share of last weekend's abuse. When you hear demonstrators chant the slogan "Take our country back!," these are the people they want to take the country back from.

Has Rich chided Democrat Howard Dean about his rhetoric? After all, in February 2004 after dropping out of presidential race, Dean, who was chairman of the Democratic National Committee until 2009, announced: "Always remember, you have the power to take our country back."

The always reliable columnist Charles Blow had chimed in on the very same theme the day before with "Whose Country Is It?" His column came complete with the thesis that the Tea Party rage is about racism, not health care, and agreed with Rich that "take our country back" was a fearsome slogan (at least when it's being used by someone other than Howard Dean).

Blow himself said "Uh oh" on his Twitter feed upon discovering he and Rich had written on the exact same topic. 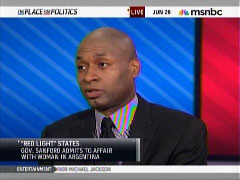 The far-right extremists have gone into conniptions.

The bullying, threats, and acts of violence following the passage of health care reform have been shocking, but they're only the most recent manifestations of an increasing sense of desperation.

It's an extension of a now-familiar theme: some version of "take our country back." The problem is that the country romanticized by the far right hasn't existed for some time, and its ability to deny that fact grows more dim every day. President Obama and what he represents has jolted extremists into the present and forced them to confront the future. And it scares them.

Even the optics must be irritating. A woman (Nancy Pelosi) pushed the health care bill through the House. The bill's most visible and vocal proponents included a gay man (Barney Frank) and a Jew (Anthony Weiner). And the black man in the White House signed the bill into law. It's enough to make a good old boy go crazy.

Politically, this frustration is epitomized by the Tea Party movement. It may have some legitimate concerns (taxation, the role of government, etc.), but its message is lost in the madness. And now the anemic Republican establishment, covetous of the Tea Party's passion, is moving to absorb it, not admonish it. Instead of jettisoning the radical language, rabid bigotry and rising violence, the Republicans justify it. (They don't want to refute it as much as funnel it.)