After a lull, in which the Times' initial assumption the Tucson shooting had something to do with political conservatism was refuted by reality, the paper again tried to use the tragedy to smear conservatives, in Frank Rich's Sunday column, "The G.O.P.'s Post-Tucson Traumatic Stress Disorder." 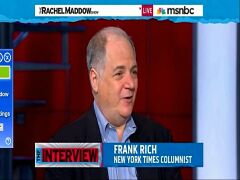 It's a truly weak effort that will change no minds. Still, Rich's absurd and mean-spirited attempt to link falling numbers for Glenn Beck and Sarah Palin should be noted.

Six weeks after that horrific day in Tucson, America has half-forgotten its violent debate over the power of violent speech to incite violence. It's Gabrielle Giffords's own power of speech that rightly concerns us now. But all those arguments over political language did leave a discernible legacy. In the aftermath of President Obama's Tucson sermon, civility has had a mini-restoration in Washington. And some of the most combative national figures in our politics have been losing altitude ever since, much as they did after Bill Clinton's oratorical response to the inferno of Oklahoma City.

Glenn Beck's ratings at Fox News continued their steady decline, falling to an all-time low last month. He has lost 39 percent of his viewers in a year and 48 percent of the prime 25-to-54 age demographic. His strenuous recent efforts to portray the Egyptian revolution as an apocalyptic leftist-jihadist conspiracy have inspired more laughs than adherents.

Sarah Palin's tailspin is also pronounced. It can be seen in polls, certainly: the ABC News-Washington Post survey found that 30 percent of Americans approved of her response to the Tucson massacre and 46 percent did not. (Obama's numbers in the same poll were 78 percent favorable, 12 percent negative.) But equally telling was the fate of a Palin speech scheduled for May at a so-called Patriots & Warriors Gala in Glendale, Colo.

Tickets to see Palin, announced at $185 on Jan. 16, eight days after Tucson, were slashed to half-price in early February. Then the speech was canceled altogether, with the organizers blaming "safety concerns resulting from an onslaught of negative feedback." But when The Denver Post sought out the Glendale police chief, he reported there had been no threats or other causes for alarm. The real "negative feedback" may have been anemic ticket sales, particularly if they were to cover Palin's standard $100,000 fee.

What may at long last be dawning on some Republican grandees is that a provocateur who puts her political adversaries in the cross hairs and then instructs her acolytes to "RELOAD" frightens most voters.

Let's give Rich the benefit of the doubt and assume his column deadline prohibited him from taking into account the vile posters being brandished by union protesters in Wisconsin, including at least one putting a picture of Wisconsin Gov. Walker in crosshairs. A clip showing that and other offensive signs can be seen at nytimes.com.