Monday's column by former Times Executive Editor Bill Keller, 'Is the Tea Party Over?', indulged in the usual doomsaying for the G.O.P.'s 2012 presidential prospects (too negative, too far to the right, etc.). Keller also found the 'doofus' Gov. Perry guilty of giving 'a wink to the evangelicals, a nod to the executioner, and an ardent defense of personal liberties for those who are heterosexual and don't need an abortion.' 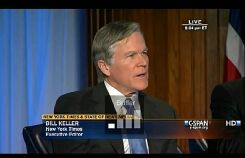 Keller, who as editor of the paper virtually ignored the Tea Party during its first year of existence, has now turned around and said the movement is about to blow its big political opportunity:

This was supposed to be the Tea Party's time. The incumbent president the rebels despise so much seemed vulnerable. The Republican establishment was AWOL, leaderless or intimidated. So the angry, God-fearing, government-loathing populist insurgents rushed into the vacuum, fired up the town halls, helped put a halt to any compromising in Congress and basically commandeered the national debate.

But the fickleness of the G.O.P. is not entirely a media phenomenon. The latest Fox poll offered Republican voters a menu of 11 candidates and found that not only were voters scattered across the conservative landscape, but a quarter of the Tea Party adherents sampled were still 'not impressed' with anyone. It's hard to impress a movement that only knows what it is against.

'Ronald Reagan couldn't get past first base in today's environment,' said one Texas Republican operative who has turned despondent about the party's drift.

Now, barring some wild twist of fate, there are two men standing: Mitt Romney, the methodical, thrill-free, ideologically elastic technocrat from Massachusetts, who has made himself the default nominee; and the last hope of the hard core, the Not Mitt: Rick Perry.

Anyone in Texas politics will tell you it's too early to put a fork in Perry. Yes, his polls have withered under attack, and he's come across in a couple of debates as a doofus. It's hard to imagine him ever delivering a foreign policy speech as slick as the one Romney made Friday. But Rick Perry, as they like to say down here, is serious as a heart attack. And I don't think it's just that Texans have a hard time imagining Perry losing because he's never done it.

Perry brings to the campaign, besides great posture and polished good looks, an economic record that looks like a vindication of Tea Party dogma, never mind that it was made possible by a quarter of America's known oil reserves, a lot of low-wage immigrants, a reluctance to waste government money on frills like education and health care, and a tax and regulatory environment out of the Wild West.

To this Perry adds a damn-the-pointy-heads denialism - global warming is a hoax, evolution is just 'a theory that's out there' - as well as a wink to the evangelicals, a nod to the executioner, and an ardent defense of personal liberties for those who are heterosexual and don't need an abortion. He may not believe in evolution, but his survival-of-the-fittest view of society is pretty Darwinian.