Puritanical Times food writer Mark Bittman made a rare appearance on the op-ed page Wednesday to call attention to his latest liberal project: "Why We're Fasting." 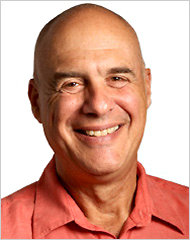 Bittman, food columnist for the Times Sunday magazine, has also written news stories for the paper from his perch as resident food scold. He made the front page of the Sunday Week in Review in February 2010 with his nanny-state call to treat soda like cigarette smoking. The text box captured Bittman's puritanical flavor: "To help dam the river of sugared drinks that Americans pour into ever-fatter bodies each year, some suggest a soda tax and warning labels." His attack on meat-eating also made the front page of The Week in Review.

I stopped eating on Monday and joined around 4,000 other people in a fast to call attention to Congressional budget proposals that would make huge cuts in programs for the poor and hungry.

Bittman bizarrely claimed that proposals in a budget bill put forward by House Republicans (including cuts in the federal Women, Infants and Children program (WIC), food stamps, and international food aid) would condemn people "to starve to death."

These supposedly deficit-reducing cuts - they'd barely make a dent - will quite literally cause more people to starve to death, go to bed hungry or live more miserably than are doing so now. And: The bill would increase defense spending.

This isn't about skepticism, however; it's about ironies and outrages. In 2010, corporate profits grew at their fastest rate since 1950, and we set records in the number of Americans on food stamps. The richest 400 Americans have more wealth than half of all American households combined, the effective tax rate on the nation's richest people has fallen by about half in the last 20 years, and General Electric paid zero dollars in U.S. taxes on profits of more than $14 billion. Meanwhile, roughly 45 million Americans spend a third of their post-tax income on food - and still run out monthly - and one in four kids goes to bed hungry at least some of the time.

Bittman really bit off more than he can chew at the end, basically accusing fiscal conservatives of being un-Christian and inhuman:

This is a moral issue; the budget is a moral document. We can take care of the deficit and rebuild our infrastructure and strengthen our safety net by reducing military spending and eliminating corporate subsidies and tax loopholes for the rich. Or we can sink further into debt and amoral individualism by demonizing and starving the poor. Which side are you on?

Though [David] Beckmann is too kind to say it, he and many other religious leaders believe that true worship can't take place without joining this struggle: "You can't have real religion," he told me, "unless you work for justice for hungry and poor people."

I don't think you can have much humanity, either.