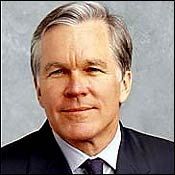 In remarks reminiscent of those made a year and a half agoin a college commencement speech by his boss, Times publisher Arthur Sulzberger Jr., Keller unleashed his liberalism before a friendly audience.

"Whatever you think of its policies, the current administration has been more secretive, more mistrustful of an inquisitive press, than any since the Nixon administration. It has treated freedom of information requests with contempt, asserted sweeping claims of executive privilege, even reclassified material that had been declassified. The administration has subsidized propaganda at home and abroad, refined the art of spin, discouraged dissent, and sought to limit traditional congressional oversight and court review. The war in Iraq alone is a case study of the administration's determination to dominate the flow of information - from the original cherry-picking of intelligence, to the deliberate refusal to hear senior military officers when they warned of the potential for chaos, to the continually inflated claims about the progress in building up an indigenous Iraqi army."

"For one thing, I strongly suspect that these attempts to enforce a single, authorized version of 'The Truth' have backfired. The evidence for that lies in the identity of some of our best sources. They are military officers appalled by the rosy portrayal of our triumphs in Iraq, government lawyers disturbed by what they see as a cavalier attitude toward civil liberties and the balance of powers, career intelligence officers who feel their work has been massaged to conform to what their superiors want to hear. As our media columnist David Carr once wrote: leaks tend to affect ships that aren't seaworthy to begin with.

"The distaste for debate and dissent has another, higher cost. Fighting terrorists, whatever method you choose, depends on making alliances at home and abroad. It depends on a consensus of the civilized world. And I wonder whether the discrediting of honest critics, the unwillingness to trust anyone except a cohort of diehard loyalists - has undermined the unity of purpose essential to such a struggle."

"Besides a decided preference for operating in the dark, the Bush administration has contributed to the woes of the press in another way. It has helped create a toxic climate for the press by inflaming the polarization of our public. At least since the election of 2000, with its attendant questions of legitimacy, some of the wide, reasonable middle of the American electorate has gravitated to angry and intolerant fringes, right and left. There are many reasons for this - including the proliferation of partisan blogs, hate-mongering radio broadcasts and intemperate television shout shows - but a president plays a considerable role in setting the tone of public discourse, and the tone of public discourse in my country has been nasty. It has been nasty by design; dividing the electorate into mistrustful camps and pandering to their fears was an explicit strategy of the president's political wizard, Karl Rove."

"Too often, though, the critics are shrill, personal, and humorless - neo-Bolsheviks and mini-McCarthy's. After our decision to report on the government's warrantless wiretapping program, some members of the administration's amen chorus proposed that the Times be charged with treason under the Espionage Act. A right-wing radio pundit suggested that I be put to death. And another defender of the national interest posted maps to my apartment - and my publishers' - on the internet, for the benefit of any lunatics who wanted to drop by and set us straight. Those of you who are acquainted with New York apartment life can imagine how that went over with my co-op board."

This from the editor of the paper that in June 2006 showed how to find the weekend homes of Vice President Cheney and former Defense Secretary Rumsfeld.

"And I would argue that in this clattering, interconnected, dangerous world, journalism that cuts through the noise has never been needed more. We have a war going very badly in Iraq, and another one in Afghanistan where our declaration of victory looks very premature."

If Keller still thinks the Iraq war is "going very badly" even after the troop surge, perhaps he should read the front http://www.timeswatch.org/articles/2007/20071120115553.aspx page of his paper.

And for a laugh, check this out:

"Third, we are agnostic as to where a story may lead; we do not go into a story with an agenda or a pre-conceived notion. We do not manipulate or hide facts to advance an agenda. We strive to preserve our independence from political and economic interests, including our own advertisers. We do not work in the service of a party, or an industry, or even a country. When there are competing views of a situation, we aim to reflect them as clearly and fairly as we can."

The Times doesn't work in the service of the United States? We can believe that.