News that the Washington Post Co. would sell its struggling weekly magazine Newsweek made Thursday's front page in a story by Stephanie Clifford: "As Newsweek Goes on Block, An Era Fades."

Clifford attempted to explain the decline of the magazine in general terms ("the American conversation has become harder to sum up in a single cover"). One point unaddressed by Clifford: Newsweek's purposeful shift toward liberal opinion over news-gathering. (Read MRC's Brent Baker on how the Weekly Standard dubbed "Newsweek" "Obamaweek" in July 2008.) By contrast, in 2009 Clifford had no problem finding a shift to the right at another struggling magazine, Reader's Digest. 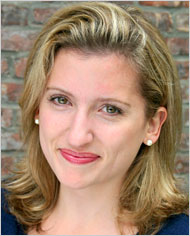 For generations, Time and Newsweek fought to define the national news agenda every Monday on the newsstand. Before the Internet, before cable news, before People magazine, what the newsweeklies put on their covers mattered.

As the American conversation has become harder to sum up in a single cover, that era seems to be ending. The Washington Post Company announced Wednesday that it would sell Newsweek, raising questions about the future of the newsweekly, first published 77 years ago.

There's some labeling disparity here, as Clifford finds Time magazine to have historically "a conservative stance," while Newsweek was merely "more youth oriented" (as opposed to having "a liberal stance").

Newsweek under The Post became a political counterweight to the Republicanism of Time under Henry Luce. While Time took a conservative stance on the Vietnam War and American culture, Newsweek ran more youth oriented covers on the war, civil rights and pop culture stars like the Beatles (though "musically they are a near disaster," the magazine said).

Meanwhile, The Economist, which offered British-accented reports on business and economic news, and The Week, an unabashedly middle-brow summary of the weekly news that began publishing in the United States in 2001, were on the rise.

Interestingly, both "The Week," and "The Economist" have political profiles to the right of Newsweek.

Clifford hinted at the triumph of opinion over news at the increasingly ill-named Newsweek, but didn't specify from which perspective those opinions were hailing:

Both Time and Newsweek were aggressively redesigned. Time, in 2007, changed its publication date from Monday to Friday and added more analysis. Newsweek, in 2009, more or less ceased original reporting about the week's events, and instead ran essays from columnists like Fareed Zakaria and opinionated analyses.

By contrast, Clifford had no trouble finding a conservative slant at another struggling magazine, Reader's Digest, in a snide June 19, 2009 story initially headlined "Reader's Digest Moves Right of Middle America."