On Aug. 1, CBS Evening News ignored the massive crowds that turned out that day at Chick-Fil-A restaurants around the nation in support of traditional marriage, free speech, or simply tasty fast food. ABC and NBC, by contrast, covered “Chick-Fil-A Appreciation Day” with full and surprisingly respectful reports. 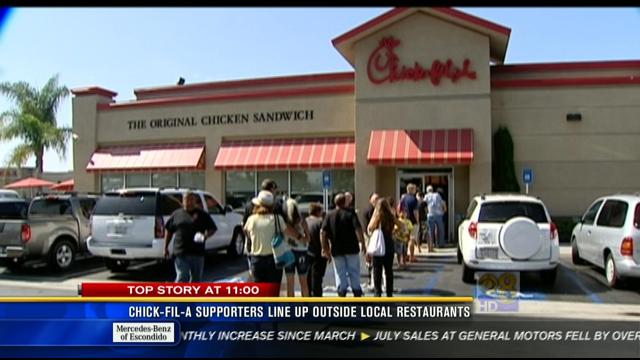 The August 1 episode of CBS Evening News completely failed to mention the massive crowds at Chick-Fil-A restaurants across the country. And it’s not as though the network was unaware of it. CBSNews.com mentioned Chick-Fil-A Appreciation Day (without providing video), reporter Stephanie Condon treated the event as an inside-the-beltway political affair, calling it a “rallying point for conservative pols.” The site also featured commentary from writer Erik Sherman, arguing that Chick-fil-A’s “brand perception” took a major hit because of Chick-Fil-A President Dan Cathy’s remarks.

NBC Nightly News showed five separate quick clips of protestors against Chick-fil-A, but showed numerous images of massive crowds in support of Chick-fil-A. Reporter John Yang noted: “From to to , people lined up in big numbers to support a fast food chain under fire.” Brian Williams even began the report with a respectful nod to the company’s product, declaring: “For those who live near one, Chick-Fil-A makes a good product and they do chicken well. It’s when the man in charge branched off into family values that his chicken chain got into the news as part of a larger debate over same-sex marriage.”

ABC’s World News Tonight also noted the “thousands and thousands of people at Chick-Fil-A restaurants from coast to coast” and showed several images of massive lines and crowds at several Chick-Fil-A restaurants. The report even featured a woman who declared: “I don’t support the politics, but I do support the food. Go Chick-fil-A.” But reporter Steve Osunsami couldn’t resist making one statement that could have been right out of a Human Rights Campaign press release: “Chick-Fil-A has long handed out millions to groups that fight against protections for gay Americans.”