"The Beckhams are breeding! The Beckhams are breeding!" That's the latest battle cry that can be heard over in the UK with the news that David and Victoria Beckham have just welcomed a fourth child into the world. While that is happy news to most people, leave it to environmentalists, lefty politicians and media outlets to question the Beckhams' bundle of joy. It is, according to these critics, irresponsible to continue having children.


According to the Guardian (UK), environmentalists and politicians are using the newest addition to the Beckham family as a wake up call to "open a public debate about how many children people should have." The UN Population Division maintains that the world's population is expected to reach seven billion in late 2011. 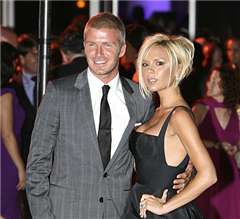 Simon Ross, the chief executive of the Optimum Population Trust, an organization that campaigns for the "gradual decrease of the population to sustainable levels," said, "The Beckhams, and others like London mayor Boris Johnson, are very bad role models with their large families." He went on to state, "There's no point in people trying to reduce their carbon emissions and then increasing them100% by having another child."


Furthermore, Ross condemned the "horrific consequences of China's one-child policy" in one paragraph, but went on to argue that "We need to change the incentives to make the environmental case that one or two children are fine but three or four are just being selfish." The Guardian reported that Ross "is calling for the government to tackle the UK's high rates of accidental pregnancy and to give child benefits and tax credits only for the first two children."


Caroline Lucas, an MP of the Green party, believes that a healthy discussion about population control is needed "whether it focuses on improving family planning or reducing global inequality" because the issue "is a debate about poverty and inequality, as well as about sustainability."


Unfortunately, prominent voices in the United States have also advocated for population control. CNN founder Ted Turner, Microsoft Billionaire Bill Gates and wealthy investor Warren Buffet are among those in the "billionaire boys club" that believe "overpopulation is the greatest threat to the planet." Turner has advocated for a "one-couple, one-child" policy and has even given money to the United Nations for the purposes of population control.


What these eco-nuts in England fail to realize is that the Beckhams' situation doesn't exactly fit with the their arguments about "poverty." David Beckham's successful soccer career and subsequent endorsements and his wife Victoria's (a former Spice Girl) music sales and fashion lines make the couple worth a whopping $271 million combined. These wealthy parents aren't exactly breeding children into a life of poverty.


Let's hope that, unlike their British counterparts, the American media encourage the Beckhams to stimulate the American economy by spending their money and raising as many children as they'd like to have here.